Particle Particulars: Why this Analysis Is Foundational for Successful Devices

In the mid-2000s, medical device experts were hopeful they’d found one solution to longer-lasting implants. 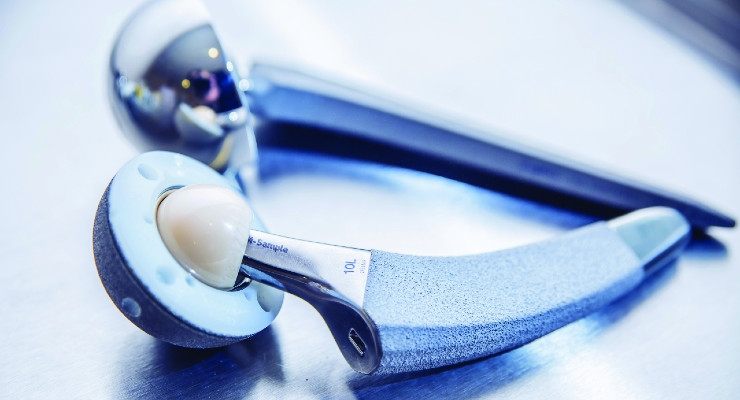 In the mid-2000s, medical device experts were hopeful they’d found one solution to longer-lasting implants. New generations of metal-on-metal hips made of cobalt chromium showed lower wear rates and less total debris than similar devices made with polyethylene and ceramic or metal.

We know implants fail over the long term because accumulating debris gradually builds up, causing decreased mobility and increased discomfort.

“What do these particles do to the human body? That is the question I’ve been working on for 20 years,” said Nadim Hallab, professor at Rush University and FDA expert on particle analysis. “Most of the time they cause subtle, local inflammation that gradually accumulates over time. That’s why implants fail after about 20 years. It gets to the point that it causes enough pain that revision is necessary.”

The thinking at the time was and still is: If we decrease debris, we increase longevity of the implant.

“That’s what implant companies have been working to minimize,” Hallab said. “If you could get rid of implant debris completely, then they will last a lot longer.”

As it turns out, it wasn’t that simple. Patients with cobalt chromium metal-on-metal hips started exhibiting a range of symptoms that were eventually found to stem from cobalt alloy implant debris reactivity.

“Despite the fact that these metal-on-metal articulations produced much less wear debris than ceramic on [polyethylene], as it turns out, that metal implant debris is so much more biologically reactive than the plastic implant debris—it didn’t take much metal debris for [metal-on-metal] not to do as well as the plastic.”

This precise issue prompted the 2010 recall of 93,000 devices. Massive litigation followed that resulted in a $2.5 billion global settlement. This ended up being a very hard lesson in the importance of particle analysis and biologic testing.

In addition to the volume of debris, we also have to consider the type of material, size of the material, and shape of the material, Hallab said. His company, BioEngineering Solutions Inc., performs a range of tests to assess materials and collect data that regulatory bodies require as part of premarket approvals and 510(k)s.

“Particle analysis couldn’t be more important to how regulatory agencies should judge your implants,” Hallab said. “Knowing all the characteristics is important, using multiple techniques is important.”

As a general rule, smaller particles are a bigger problem because there are more of them.

“Instead of a million particles, you can have 10 billion particles for the same amount of implant wear. That’s a big deal,” he said. “The less particles there are, the fewer the cells they will interact with, the less inflammation there will be.”

But again, that depends on other factors. A single type of analysis can paint an incomplete picture if it captures the trait of only a small portion of your debris, he said. Because of that, Hallab’s is one of the few companies using both scanning electron microscopy and laser diffraction analysis.

“It’s better to analyze all the debris produced by the implant to understand the characterization of all the debris than to take a sample that represents a small portion of the debris as you do in scanning electron microscopy (SEM),” he said. “That doesn’t really give you a full idea of what’s going on.”

Hallab is an ardent advocate of adding in laser diffraction analysis, to the point he doesn’t charge clients for that additional analysis.

“But if you expand the number of ways of looking at that debris into laser diffraction that counts millions to billions of particles, then you can see the one-in-a-million or one-in-a-billion large particles that circulate around that then tell you not all of your debris is in that tiny range,” he said. “Maybe even 90 percent of total wear volume can be large particles, which can be of less concern because they are less biologically reactive and they reduce to dose of delivered particles dramatically. Using multiple techniques to analyze that debris is so important in this characterization.”

By using both SEM and laser diffraction, clients get a bigger picture of their debris. Because particle analysis is a relatively inexpensive aspect of medical device development, Hallab encourages clients to amass as much data as possible.

And with both levels of analysis, you’re more likely to find your best- and worst-case scenarios.

“Instead of a brief snippet, you’re getting a broad panoramic view,” Hallab said. “It’s also highly quantitative. You’re not getting interpretation of something. These are lots of characteristics and numbers and distributions that are all quantifiable. It can be compared to past and in-use implants in a quantitative manner, so it’s high value.”

On more than one occasion, he’s seen clients find a source of data that manages to distinguish their product in a highly competitive market, he said. That can cut both ways, of course.

“It doesn’t take much to be worse than other implants and be eliminated from the market,” Hallab said. “At the same time, all it has to be is slightly better than what’s out there to become the market leader.”

Those are the devices that are poised for success.

“It’s marginal technical advances that are winning the day and how we’re evolving to implants that last longer and longer,” Hallab said.

Given the infection and mortality rates for revisions for people in their 80s, longer-lasting implants lead to critically better patient outcomes, he said.

Dawn Lissy is a biomedical engineer, entrepreneur, and innovator. Since 1998, the Empirical family of companies (Empirical Testing Corp., Empirical Consulting LLC, and Empirical Machine LLC) has operated under Lissy’s direction. Empirical offers the full range of regulatory and quality systems consulting, testing, small batch and prototype manufacturing, and validations services to bring a medical device to market. Empirical is very active within standards development organization ASTM International and has one of the widest scopes of test methods of any accredited independent lab in the United States. Because Lissy was a member of the U.S. Food and Drug Administration’s Entrepreneur-in-Residence program, she has first-hand, in-depth knowledge of the regulatory landscape. Lissy holds an inventor patent for the Stackable Cage System for corpectomy and vertebrectomy. Her M.S. in biomedical engineering is from The University of Akron, Ohio.
Related Searches
Related Knowledge Center