Permits asymptomatic, non-prescription, over-the-counter self-use for people with or without symptoms. 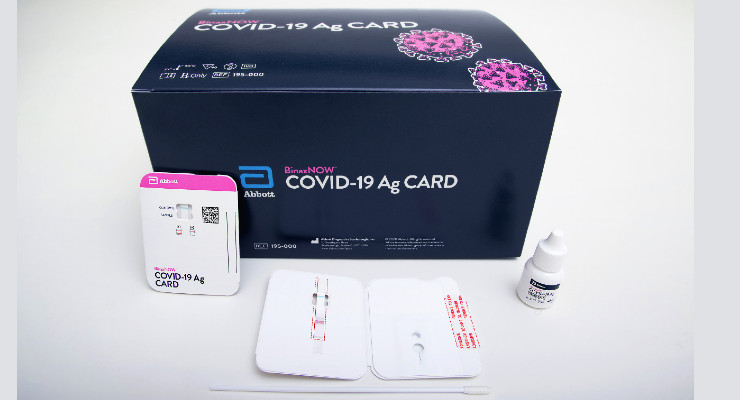 Abbott has received U.S. Food and Drug Administration (FDA) Emergency Use Authorization (EUA) for over-the-counter, non-prescription, asymptomatic use of its BinaxNOW COVID-19 Ag Self Test for COVID-19 detection. Abbott will begin shipping to major food, drug, and mass merchandiser retailers in the coming weeks.

The test can be used on children as young as two when samples are collected by an adult and for all people aged 15 years or older. The test will come in a two-count box to meet serial (frequent) testing requirements.

"We've now accomplished what we set out to do when we launched BinaxNOW, which is to bring an accurate, affordable and readily available test to the American people that they can have on hand, whether they want to test frequently or in certain circumstances," Robert B. Ford, president and CEO of Abbott told the press. "Together with vaccines, the BinaxNOW Self Test will help Americans get back to doing what they want and need to do—like going to work and school or seeing friends and family—with greater confidence."

Abbott launched the BinaxNOW professional test nationwide in August 2020 and scaled up production at its new U.S. manufacturing facilities to produce 50 million tests per month. The U.S. Department of Health and Human Services (HHS) purchased the company's first 150 million tests, sending them to K-12 schools, nursing homes, historically black colleges and universities and underserved communities, where they remain in use today and serve as a powerful tool to help prevent the virus from spreading.

The Advantages of Serial (Frequent) Testing with BinaxNOW
Serial testing makes it possible for people to know infection status when it matters most. Because rapid antigen testing is less costly, people can test themselves with greater regularity, important for those who may be concerned they were recently exposed or may be attending a large event in close confines.

With results in just 15 minutes, the BinaxNOW Self Test lets people who test positive immediately isolate so they do not infect others, rather than waiting days for results from a lab or send-away at-home tests. BinaxNOW is proven to be high quality, with a complaint rate for the 150 million professional tests distributed to HHS of 0.0034 percent as of March 24.

Digitally Verified Results Remain Important in Many Settings
Abbott's earlier innovations in rapid testing remain as important as ever, especially for people who need to show digitally verified proof of a negative COVID-19 test before returning to work, school, travel, and congregate-care living environments.

As part of this authorization, the BinaxNOW COVID-19 Ag Card test for professional use will no longer require a prescription, meaning that states, workplaces, schools and other organizations no longer need to work through a medical provider to generate a prescription before the test can be administered. For congregate environments using the professional-use version of BinaxNOW, a CLIA certificate is still required.

Abbott continues to deploy its NAVICA system so that individuals can obtain digitally verified test results. Users can download the NAVICA app, take a BinaxNOW Home Test or BinaxNOW professional-use test at a NAVICA-enabled testing site, and display negative results through an encrypted NAVICA Pass. This solution supports organizations—such as employers, K-12 schools, universities, sports and entertainment venues, and nursing homes—to take ownership of their testing solutions and make informed decisions about who enters their facilities.

Ct counts are the number of times a PCR instrument must cycle through to amplify enough genetic material of the SARS CoV-2 virus for it to be detectable. The greater the amount of virus present (viral load), the fewer cycles required to detect the virus.

In a recent study published by Pilarowski et al. in the peer-reviewed journal Clinical Infectious Diseases, researchers in California assessed BinaxNOW in a community-based setting in people of all ages with and without symptoms. They demonstrated high sensitivity and specificity for BinaxNOW, including in asymptomatic people and in children. Among 102 people who were asymptomatic or whose symptom onset was greater than 7 days before testing, sensitivity for a Ct cutoff of 30 was 100 percent and specificity was 98.9 percent. As Ct counts increased to 35 (therefore reflecting less viral load) performance remained high in asymptomatic people of all ages, showing 97.5 percent sensitivity and 99.7 percent specificity.

As part of its Emergency Use Authorization for self-testing, Abbott has committed to complete a post-authorization study to determine serial testing performance in people without symptoms.