Study suggests use of a continuous and centralized respiratory monitoring system is desirable for post-op management. 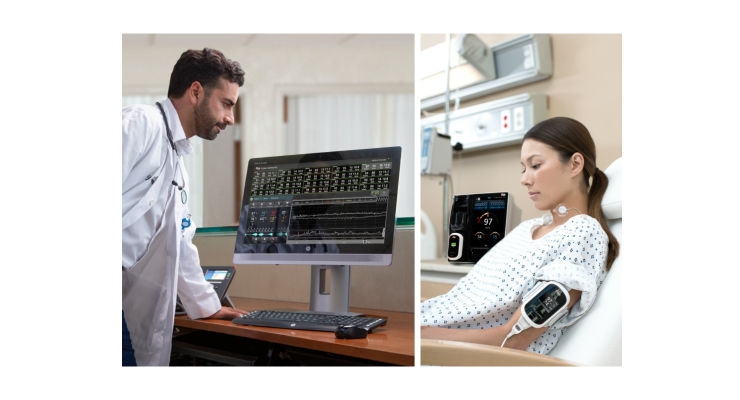 Masimo announced that in a study recently published in the Journal of Clinical Monitoring and Computing, researchers at Nippon Medical School in Tokyo used Masimo Patient SafetyNet and rainbow Acoustic Monitoring (RAM), acoustic respiration rate monitoring with RRa, as a centralized continuous monitoring system to identify the incidence and predictors of desaturation and bradypnea in postoperative patients—concluding that “Use of monitoring systems might provide a safety net for postoperative patients.”1

Patient SafetyNet is a supplemental remote monitoring, patient surveillance, and clinician notification system that works in conjunction with Masimo and third-party bedside monitoring devices to display near real-time data at central stations. RAM with RRa uses an acoustic transducer positioned on the patient’s neck to provide noninvasive, continuous respiration monitoring.

Hypothesizing that postoperative desaturation and bradypnea might occur even in non-ICU patients without serious complications, and in patients who did not undergo major surgery, Drs. Masashi Ishikawa and Atsuhiro Sakamoto set up a centralized postoperative monitoring system in the general ward to investigate how common these events are for such patients (and what might predict them). They analyzed demographic and monitoring data from 1,064 adult patients who underwent general anesthesia for various surgical procedures over a four-month period. The patients were monitored using a pulse oximeter and an RRa sensor for at least 8 hours after surgery, data which were automatically transferred to Patient SafetyNet.

The researchers concluded, “Our study suggests that use of a continuous and centralized respiratory monitoring system for overnight postoperatively is desirable for postoperative management in the general ward, which would likely improve the safety of postoperative patients, especially those with risk factors for respiratory depression.”

The researchers commented on a number of methods of respiratory rate monitoring, stating, “Continuous and centralized monitoring of oxygen saturation and respiratory rate can detect respiratory depression before it results in critical events such as cardiac arrest. Several methods of respiratory rate monitoring are currently used, including manual counting of breaths by a caregiver, capnography, and transthoracic impedance measurement. Manual counting of breaths (such as auscultation) is an intermittent, labor-intensive and unreliable method. Capnography provides accurate and continuous monitoring, but requires a nasal or facial interface, which can be uncomfortable and may lead to failure if the interface is moved. Transthoracic impedance is non-invasive and can detect respiratory efforts, but is unable to detect alveolar hypoventilation caused by airway obstruction.”2-6

Additionally, the researchers commented on RAM with RRa, the respiratory rate monitoring method used in the current study, and referenced another study in which RRa and capnography were compared, stating: “RRa is an acoustic monitoring device that continuously measures respiratory rate, and is as accurate as capnography in extubated patients.7 Patient activities, such as talking, coughing and crying, affect the results of both RRa and capnography. The measurement errors during these activities are, however, not clinically relevant because they require that the patients are awake and breathing. Further, the RRa sensor appears to be well-tolerated and no more subject to error than capnography.7 RRa was found to be a reliable device and had fewer complications in this study.”

Masimo develops and produces an array of monitoring technologies, including measurements, sensors, patient monitors, and automation and connectivity solutions. Its mission is to improve patient outcomes and reduce the cost of care. Masimo SET Measure-through Motion and Low Perfusion pulse oximetry, introduced in 1995, has been shown in over 100 independent and objective studies to outperform other pulse oximetry technologies.8 Masimo SET has also been shown to help clinicians reduce severe retinopathy of prematurity in neonates,9 improve CCHD screening in newborns,10 and, when used for continuous monitoring with Masimo Patient SafetyNet in post-surgical wards, reduce rapid response team activations, ICU transfers, and costs.11-13 Masimo SET is estimated to be used on more than 100 million patients in hospitals and other healthcare settings around the world,14 and is the primary pulse oximetry at nine of the top 10 hospitals according to the 2019-20 U.S. News and World Report Best Hospitals Honor Roll.15 Masimo continues to refine SET and in 2018, announced that SpO2 accuracy on RD SET sensors during conditions of motion has been significantly improved, providing clinicians with even greater confidence that the SpO2 values they rely on accurately reflect a patient’s physiological status. In 2005, Masimo introduced rainbow Pulse CO-Oximetry technology, allowing noninvasive and continuous monitoring of blood constituents that previously could only be measured invasively, including total hemoglobin (SpHb), oxygen content (SpOC), carboxyhemoglobin (SpCO), methemoglobin (SpMet), Pleth Variability Index (PVi), RPVi (rainbow PVi), and Oxygen Reserve Index (ORi). In 2013, Masimo introduced the Root Patient Monitoring and Connectivity Platform, built from the ground up to be as flexible and expandable as possible to facilitate the addition of other Masimo and third-party monitoring technologies; key Masimo additions include Next Generation SedLine Brain Function Monitoring, O3 Regional Oximetry, and ISA Capnography with NomoLine sampling lines. Masimo’s family of continuous and spot-check monitoring Pulse CO-Oximeters includes devices designed for use in a variety of clinical and non-clinical scenarios, including tetherless, wearable technology, such as Radius-7 and Radius PPG, portable devices like Rad-67, fingertip pulse oximeters like MightySat Rx, and devices available for use both in the hospital and at home, such as Rad-97. Masimo hospital automation and connectivity solutions are centered around the Iris platform, and include Iris Gateway, Patient SafetyNet, Replica, Halo ION, UniView, and Doctella.

ORi and RPVi have not received U.S. Food and Drug Administration 510(k) clearance and are not available for sale in the United States.