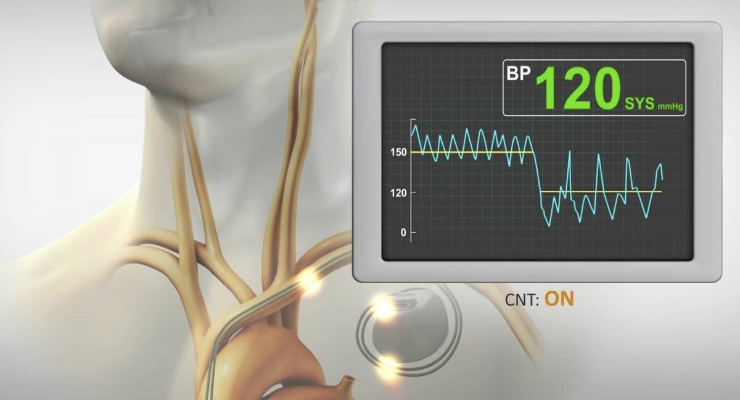 “Achieving a statistically significant blood pressure reduction with BackBeat CNT in this patient population is particularly exciting given that over 70% of pacemaker patients have high blood pressure as well as other known co-morbidities,” said Karl-Heinz Kuck, M.D., Ph.D., director of cardiology at the Lans Medicum, Hamburg, Germany and study principal investigator who presented the results at TCT. “This is a particularly challenging at-risk population with a very high rate of isolated systolic hypertension and persistently elevated blood pressure despite multi-drug therapy. BackBeat CNT appears to be a promising treatment to significantly reduce systolic blood pressure and has a favorable risk benefit profile as the device is already required for rhythm management.”

All patients enrolled in the Moderato II study, a European prospective, multi-center, double-blind, randomized study of BackBeat CNT vs. control in 47 patients with persistent hypertension (ASBP ≥130 mmHg and office systolic blood pressure (OSBP) ≥ 140 mmHg) despite one or more anti-hypertensive medications and a pacemaker indication, were implanted with Orchestra BioMed’s Moderato System, an implantable pulse generator that delivers BackBeat CNT as well as standard rhythm management functions that recently received CE mark approval. Following a 30-day run-in period during which patients received only standard pacing along with anti-hypertensive medications, patients who met follow-up screening criteria for daytime ASBP, were randomized to BackBeat CNT or control groups. Prior to randomization, mean ASBP for both groups were 136.3 mmHg with patients, on average, treated with over 3 prescribed anti-hypertensive drugs. After 6 months, mean ASBP was reduced by 11.1 mmHg (p<0.001) in the BackBeat CNT group as compared to a reduction of 3.1 mmHg in the control group (p=0.17). The treatment group saw a high (85%) overall response rate, with approximately 54% of the BackBeat CNT-treated patients experiencing ASBP reduction at 6 months of greater than 10 mmHg, an amount associated with a clinically meaningful reduction in risk of heart attack and stroke. The BackBeat CNT group also experienced significantly greater reduction, 12.4 mmHg, in OSBP over the control group (p=0.02). There were no MACE events in the BackBeat CNT group and 3 events in 2 patients in the control group. Additionally, there were no notable differences in echo parameters between the two arms. Diastolic blood pressure and heart rate did not change between groups during the study period.

Over 1.1 million pacemakers are implanted annually worldwide. Patients indicated for a pacemaker have a particularly high rate of elevated blood pressure, with more than 70% of these patients suffering from hypertension. Based on 2017 American College of Cardiology/American Heart Association high blood pressure guidelines, it is estimated that over 60% of pacemaker patients have uncontrolled hypertension despite medical therapy.

"We are highly encouraged by these promising double-blind, randomized results with BackBeat CNT in the Moderato II study,” said David Hochman, chairman and CEO of Orchestra BioMed. “We plan to use these results to help design registrational studies to support FDA and other global regulatory approvals for devices delivering BackBeat CNT and will be working to forge strategic collaborations to accelerate making this potentially high-impact therapy available to patients with known unmet needs.”
Related Searches
Related Knowledge Center