Prevention through digital helpers from Fraunhofer and partners. 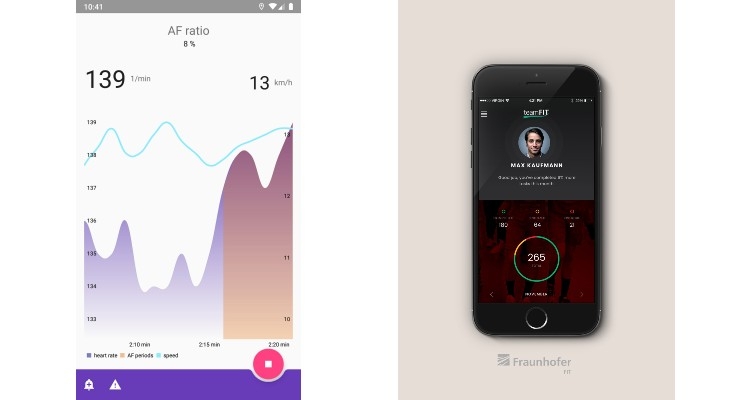 Demand for apps for preventive health care is growing all the time. Particularly popular are diagnostic assistants that record physiological and fitness data. However, there are data protection concerns with these tools. Researchers at the Fraunhofer Application Center SYMILA in Hamm have developed two prevention apps that safeguard users’ data protection rights. While teamFIT is aimed at sports trainers who want to monitor the current state of fitness of their teams, BAYathlon is designed to help detect a specific form of cardiac arrythmia at an early stage. From November 18 to 21, the team of researchers will be demonstrating how the apps work at MEDICA 2019 in Düsseldorf (Hall 10, Booth G05).

Atrial fibrillation is one of the most common types of cardiac arrythmia in adults. If the condition remains undetected, it can lead to a stroke. With BAYathlon, a team of researchers at the Fraunhofer Application Center SYMILA in Hamm, a facility operated by the Fraunhofer Institute for Applied Information Technology FIT in Sankt Augustin, has developed a diagnosis app that enables atrial fibrillation to be detected on time. The project is being sponsored by industrial partner Bayer AG, which was closely involved in the research work. Bayer is also conducting a study in tandem with the project.

The app, which runs on all devices from Android 4.4 onward and on iOS as of Version 9.3, will be used in conjunction with a chest strap or a heart rate monitor on the wrist—usually when doing sport or exercise, such as jogging or cycling. A heart rate measurement device is built into the strap or monitor and transmits the measurement data to the user’s smartphone via Bluetooth. BAYathlon then evaluates the live heart rate data shown on the display. “A characteristic indicator of atrial fibrillation is that the heartbeat interval exhibits strong fluctuations within a few seconds. If a certain fluctuation threshold value is exceeded, the integrated algorithm recognizes it. If there is anything conspicuous, an acoustic warning signal sounds,” explained Michael Fuchs, scientist at the Application Center SYMILA. A message appears on the display telling the wearer of the device to take a break. In addition, the measurement results are graphically documented, so that doctors can initiate therapies if required.

The app has already been tested with the help of test data records and achieved a success rate of 95 percent.

Another advantage is that the data is saved in the app and processed there; there is no need for an Internet connection. Because data is not sent to the server, the user’s data protection rights are safeguarded. A further USP is that BAYathlon can be used in conjunction with all measurement devices that support open source.

An App that Minimizes the Risk of Injury
With teamFIT, which is based on the teliFIT platform, trainers receive a tool for objectively evaluating the current state of fitness of the athletes under their care. The goal of the prevention app is to detect early signs of a looming injury that could put a player out of action for a lengthy period of time. In such cases, the trainer can reduce the athlete’s training workload, for instance, so as to ease the strain on the affected area. In professional sport, finding the perfect balance between all-out intensity and periods of rest is critically important. The app helps trainers to achieve this. teliFIT is already being used by the second-division German handball team ASV Hamm-Westfalen e.V., but the license is available to all sports clubs. It supports both iOS and Android devices.

Players use the app several times a day, before and after every training session, when they answer certain questions and provide information about things such as their general state of health, their sleep pattern and their training. The trainer receives the evaluated data for all players for every day in a clear overview. Parameters such as wellness score, chronic strain, acute strain, EWMA (exponentially weighted moving averages), freshness index, ACWR (acute chronic workload ratio), monotony index, and stress, help the trainer to estimate the athletes’ fitness condition. “The app anonymizes each player’s answers so that they cannot be identified by their teammates. For their part, trainers are saved the tedium of laborious questioning and the filling out of Excel lists,” said Prof. Harald Mathis, scientist at Fraunhofer FIT and director of the Application Center SYMILA.