The computer program displays the individual tissue layers that are affected by a surgical channel. 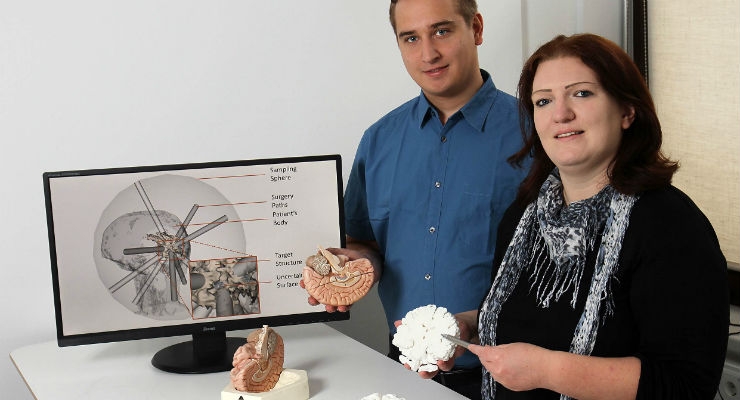 The software developed by computer scientists from Kaiserslautern could help doctors to prepare for such minimally invasive operations more easily. Image courtesy of Koziel/TUK.

In order to remove the appendix, usually only a small surgery tunnel is necessary. But doctors rely on such minimally invasive surgeries in other areas, such as tumor removal scenarios. However, such surgeries must be planned precisely in advance. Doctors use different diagnostic procedures to find the best solution, which is very time-consuming. A Software developed by computer scientists from Kaiserslautern could help doctors to prepare for such operations more easily in the future. At the Medica medical technology trade fair in Düsseldorf from 12th to 15th November, the researchers will present their method at the research stand (hall 7a, stand B06) of Rhineland-Palatinate.

Many surgeons today use minimally invasive surgery to remove, for example, a tumor in the brain: A small hole in the cranium is sufficient for them to reach the affected area with a small probe. The probe is equipped with surgical instruments and a camera that provides the doctors with the necessary images. “Such a surgery must be thoroughly planned beforehand,” said Dr. Christina Gillmann of the Technische Universität Kaiserslautern (TUK). “Surgeons must locate the ideal route, i.e. the surgical channel, to the affected area, which damages as little important tissue in the brain as possible.”

For this purpose, they use images from magnetic resonance tomography (MRT) taken before the surgery. But other diagnostic procedures, such as computer tomography, are also used for such planning, depending on the disease in question. These X-ray techniques provide physicians with images of patients on which they can see the body part to be operated in grey scales. “This data is often examined layer by layer in everyday clinical practice, however, with this technique it is often difficult to determine in which tissue layers there might be a suitable surgical channel,” explains the scientist.

A new procedure, on which Gillmann and her team are working, could remedy this problem: It enables doctors to plan their operations intuitively. “The computer program displays the individual tissue layers that are affected by a surgical channel,” said the computer scientist. “This allows different channels to be compared and risks to be discussed.” In this way, doctors can also identify possible complications that might occur during the operation. “For example, the surgical team could discuss which route is the most appropriate for the individual patient,” Gillmann continued.

The computer scientists at the TUK use various medical images as a data basis for their method. Using their own calculation methods, they re-evaluate this image data. “We can visually separate and display the individual tissue layers so that it is easier to see where a surgical channel should be located,” explained Gillmann. The researchers have designed their technology in such a way that it is easy to use for surgeons.

The software is still in the development stage. “It will take a few more years before it can be used in clinical daily routine,” the computer scientist continues. The Kaiserslautern researchers are working closely with the Premier Health Hospital in Dayton, Ohio, USA.

Gillmann is researching in the field of “Computer Graphics and Human Computer Interaction” under Professor Dr. Hans Hagen. Over the last two decades, the research group has been working on processing medical imaging data in such a way that they can be used simply and reliably in everyday clinical practice. For example, they have succeeded in using their methods to separate tumors from healthy tissue more clearly in images. In their projects, the computer scientists work closely with various partners, including the University Hospital Leipzig and the Premier Health Hospital in Ohio.