A Top-Notch Jumpstart for Startups 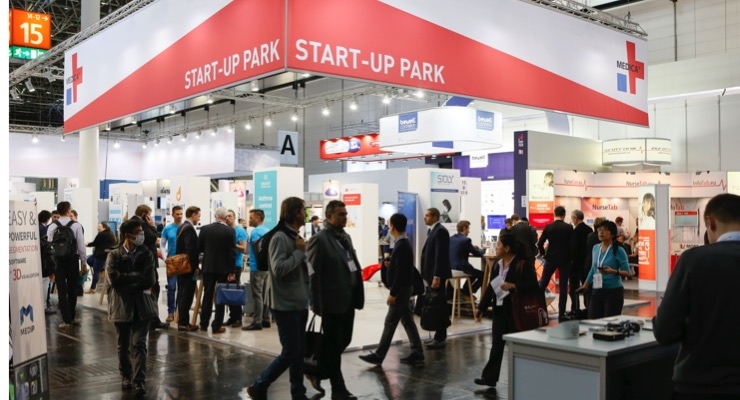 The Start-Up Park that debuted at this year's Medica attracted a steady stream of visitors during the four-day event. The 16 companies within the park showcased a range of technologies, from a smartphone-enabled peak flow meter and sensor-system belt to a Cloud-driven tool for ECG analysis. Image courtesy of Messe Düsseldorf.

Zsolt Szrnka wanted a bigger company booth at Medica this year. But his timing was off.

Szrnka began investigating exhibition hall rental space in August—several months after the show floor had sold out. At that late hour, the only available plots were within a 500-square-meter area reserved exclusively for startups, and those spaces were quickly filling up.

Unwilling to forego the event, Szrnka booked space in the special section and hoped for the best.

Any doubts Szrnka might have had about his decision quickly dissipated last week as he and dozens of other business executives networked with a steady stream of potential clients and partners at the Medica Start-Up Park, a new feature added to this year’s event lineup. Complementing the contents presented at both the Connected Healthcare and Health IT forums, the Park was reserved for startup firms developing 21st-century solutions to global healthcare challenges.

Strategically housed in Hall 15 near exhibitors of medical wearables and digital health solutions, the Start-Up Park featured 16 early-stage companies with products in various stages of development. Szrnka was there on behalf of Smart Respiratory Products Ltd., a 3-year-old United Kingdom firm that is working on CE Mark certification for its smartphone-connected peak flow meter for asthmatics. The tiny device—manufactured in Hungary—clicks into the audio jack of any smartphone and works seamlessly with a free app, available for iOS and Android. It has no batteries and only one moving part: A small propeller that rotates as the user blows into it.

The Smart Peak Flow meter complies with American Thoracic Society recommendations and its accompanying ISO 23747 standard. The product reportedly has an accuracy rate above 10 percent, and the data it collects is stored and anonymously synced to the Cloud.

“Our goal was to make a device that is small, easy to use, and not expensive,” Szrnka, Smart Peak Flow’s operations manager, told Medical Product Outsourcing on the Medica show floor. “It’s considered a Class II medical device, but it hasn’t been tested widely yet. We’ve only tested it for accuracy in the lab so far.”

Szrnka expects the device to obtain CE Mark approval in January. To prepare for market release (presumably some time next year), he and his colleague explored potential distribution partnerships with booth visitors.

“This [Park] gives us great visibility,” Szrnka said. “We wanted to get a bigger booth but we really can’t complain. We’ve had a lot of people coming to visit us—doctors, clinicians, people with asthma—and many of them are telling us our product is very cool. We have all the right reasons to be here.”

So did NuvoAir, a Swedish startup that launched a handheld, ultra-portable, smartphone-enabled spirometer in Europe last year. Developed in accordance with ISO 26782:2009 standards, the Air Smart Spirometer measures all the parameters of a clinically professional device but at a fraction of the cost (69 euros).

Like its potential rival a short walk across the Park, NuvoAir hosted a steady string of visitors during Medica (held Nov. 13-16 in Düsseldorf, Germany). But the 2-year-old company markedly boosted its visibility on the final day by winning second place in the 6th Annual App Competition. NuvoAir’s app (appropriately dubbed Air) allows doctors to perform spirometry tests in a fraction of the time it takes desktop devices to measure lung function. The app also is designed to help physicians manage multiple patients so they can better prioritize cases.

“The innovation here is to make this device simple, affordable, and bring it to the masses,” CEO Lorenzo Consoli told MPO. “This kind of tool in the home setting can really improve patients’ lives.”

“It’s a great idea because it’s a low-cost one,” agreed Dr. med Sven Soecknick, a German doctor and general practitioner who stopped by NuvoAir’s booth on Nov. 15.

The company currently is working to certify and commercialize a Bluetooth version of Air Smart. To that end, Consoli and Max Ladow, product manager, used their time at Medica to actively search for distributors.

“We have a partnership with Novartis and some distributors in Europe. We’re looking mostly for distributors at this show, but all the other things too like customers and funding,” Consoli said. “Traffic has been very good. We’ve been very busy for two and a half days. This is the main trade fair in the world for medical devices. It’s our first time here and it’s been going well. We decided to come to Medica this year because we now have something to show. We didn’t want to come too early.”

All startups in the park had something to show, though some products were more enticing than others to passers-by. Two-year-old Norwegian firm No Isolation, for example, caught visitors’ attention with a double dose of its telepresence robot designed specifically for children and young adults with long-term illnesses.

Launched in September 2016, the AV1 is being used in Denmark, The Netherlands, Norway, and Sweden to prevent isolation and loneliness in sick children. Company representatives, however, were not pitching the AV1 at Medica but rather KOMP, a simple device designed to help the elderly stay socially connected to friends and family. KOMP was developed particularly for seniors with limited digital skills, poor eyesight or hearing, or limited physical abilities.

“We wanted to create a product that was true to our mission, which is to end social isolation,” said Calin Fabri, regional manager for No Isolation. “Since we already had a product for children, we wanted to use the latest technology to help other groups that tend to be socially isolated. Who are those groups? The sick and the elderly.”

KOMP is basically a computer with one button. Users only have to switch it on or off to access photos or electronic messages supplied by family or friends through an app; the standard pop-up ads, updates, log-in pages, and other annoyances associated with modern internet use was purposely missing. KOMP is expected to debut in Europe in February.

“I think we’re a good fit for the Start-Up Park because we’re a startup,” Fabri mused. “We didn’t expect this success, to be honest. We must have talked to 50 -100 people a day. I’m not sure if it’s our position on the corner or people coming from both sides but people are always coming to see us. Of course, the robot helps because it’s cute—people are curious about it and want to see more.”

People also wanted to see more of the virtual reality (VR) environment offered by French startup Revinax. The 3-year-old company creates and provides VR learning modules in various industries, including medical, marketing, maintenance, and traditional skills. Since its creation, Revinax has filmed more than 8,500 minutes of 3D tutorials in a multitude of settings. In the operating room, the technology offers observers a detailed view of surgery from an instructor’s perspective. Last week (coincidentally—or not—on the first day of Medica), the company’s technology was incorporated into a live procedure using MicroSoft’s HoloLens, enabling surgeons at Montpellier University Hospital to access additional imagery and video during the operation.

“When it comes to surgery, a certain amount of ‘watch and learn’ will always be necessary,” said Dr. Maxime Ros, neurosurgeon and Revinax co-founder. “Virtual reality and mixed reality provide new opportunities to efficiently train surgeons by giving them a direct view of the operating site. Students can now observe the entire procedure from the perspective of the performing surgeon.”

Besides surgical training, VR and mixed-reality technology can also be helpful with new product training and internal corporate communication efforts. Revinax executives said the innovation is already being used for such purposes in the medtech industry by Boston Scientific Corp. and Stryker Corp., as well as companies in the aerospace and energy sectors.

“We’re looking for medical partnerships to increase the number of our healthcare-related tutorials,” noted Jean-Vincent Trives, Revinax’s chief operating officer. “Our goal is to create a medical encyclopedia of surgical procedures. If you’re looking for partnerships, this is the place to be. We’ve had great foot traffic. We’re close to the east entrance and VR and mixed reality are very attractive tools. They draw in a lot of people.”

Companies without such eye-catching technology, though, held their own at the Park by enticing visitors with truly unique technology. Some of the more novel items included a microscope from South Korean firm Tomocube Inc. that displays both 3D holograms and 3D fluorescence imaging; a Cloud-driven tool for ECG analysis from Polish startup consonance; a smartphone electrocardiograph tool from Italian firm D-Heart Srl; and a sensor-system belt from German startup humotion that both measures and analyzes the motion data of geriatric or orthopedic patients.

“We’re looking for customers, not investors. And each day we have been here has brought us 12 to 15 additional potential customers,” said Rafal Samborski, Ph.D., CEO of consonance. “I would be very happy if after this trade show we got two to three more customers. That would make me very happy.”

Based on Park traffic, Samborski may just get his wish.