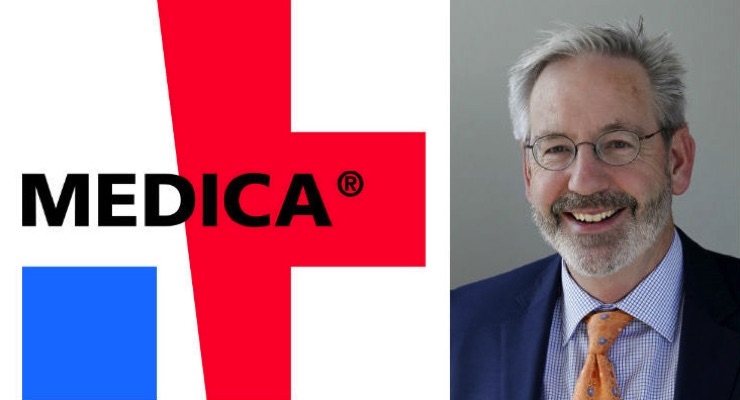 Like the world itself, Medica has changed significantly since its inception 48 years ago. Exhibitor and visitor attendance has proliferated, and programming has evolved to reflect healthcare’s various trends and changes over the last four and a half decades. Show organizers, for example, debuted the European Hospital Conference in 2011 to help attendees better understand European healthcare policy and the impact of a patients’ rights directive on the continent’s clinics. The event’s Tech Forum, conceived in 2010, has progressed to encompass data protection/security, hybrid-OP, emerging export markets, and the European Medical Devices regulation this year. Similarly, apps and wearable technologies have become a regular part of the Connected Healthcare Forum, inaugurated just two years ago.

Even the event schedule is different, held now Monday to Thursday rather than Wednesday-Saturday. “The course of registrations is showing that the incredibly high level of participation seen in [2015] can be expected again, thereby indicating a high level of satisfaction among exhibitors with the new schedule,” said Joachim Schäfer, managing director of Messe Düsseldorf. “The concentration of purchasing power is reflected at Medica by the visitors’ high level of decision-making competence as well as an increase of visitor numbers from non-medical fields such as hospital management and trade on a national and international level.”

A driving force behind many of Medica’s changes over the years, Schäfer spoke with Medical Product Outsourcing about the four-day event being held this week (through Nov. 17) in Düsseldorf, Germany, as well as the overall medical technology industry. In the last of a two-part Q&A, Schäfer addresses the future of both Medica and the overall medical technology industry.

Medical Product Outsourcing: What changes have you made to the Medica/Compamed event in recent years to reflect changes in the industry?
Joachim Schäfer: We are continuously working on adapting our events, such as the MEDICA and COMPAMED trade shows, to changing market requirements. This also involves the launch of new formats for the program of forums and conferences that accompany the shows and also had an impact on our choice of days on which they are held. For the first time last year, for instance, MEDICA and COMPAMED were staged completely parallel over four days – and also for the first time on normal weekdays, from Monday to Thursday instead of Wednesday to Saturday as in  the past. These changes were well worth it. More than 130,000 trade visitors (COMPAMED: approximately 19,000) attended “evenly distributed “ on all the individual days of the events. Both the COMPAMED's forums and MEDICA's conferences and forums were also consistently well attended on all days of the trade shows.

MPO: Past years’ shows have had a particular theme/focus (in 2011, for example, the focus was mobility IT). But there was no specific theme to the 2015 event and none for this year. Why? Did the organizers deliberately decide to discontinue “themes”? If so, why?
Schäfer: MEDICA is very diverse in terms of its featured areas and in regard to the issues that it deals with. It presents everything required to provide good patient care at one time and one place. It would therefore not be appropriate to pick just one or two issues to address and focus on. That is because there is usually no actual ‘overriding issue’. Topical trends that are particularly relevant to the respective target groups are taken up at the accompanying conferences and the forums that have been integrated into the trade show. Of course, regardless of this, there are always certain mega-trends that affect almost every sector and are therefore addressed in all aspects of the program. Digitization is one such example.

MPO: What aspect of medical technology do you find most interesting? Why?
Schäfer: It will be exciting to see how the arrival of Artificial Intelligence will change medical technology and particularly alter the processes used to provide healthcare. The Fraunhofer Society will be presenting a robot at the MEDICA 2016 trade show whose Artificial Intelligence has allowed it to acquire ‘touch sensitivity’ so that it is able to place needles for biopsies and injections much faster than a person could. Of course, such developments will not make physicians redundant in the future, but the new technical opportunities will fundamentally change how they work.

MPO: Based on what you’ve seen in the last few years, what direction do you see the medtech industry headed in?
Schäfer: The field of medical technology remains a fascinating growth market. The very strong period, particularly at the beginning of the millennium, when companies were on average able to achieve double-digit revenue growth on international markets, appears to have come to an end. But many market reports continue to indicate that business with medical technology continues to be promising for the future. The suppliers' innovative power is a strong indication of market prospects that still appear to be very good. According to the European Patent Office, no other field of technology submitted as many patent applications in 2015 as did the field of medical technology.

What has changed for the companies is their access to customers, which is a development that will this year again be a dominant feature at MEDICA, which serves as the market's trend barometer. For decades, suppliers of medical technologies have negotiated directly with physicians and the directors of individual clinics, but today investments are being made on the basis of cooperation in purchasing networks or in large large-scale hospital corporations operating through superior central instances. Trading has also become very important as it particularly helps suppliers on the export market to comparatively easily establish market presences in preferred countries. In summary, it may be said that these developments have resulted in harsher competition and an increasing pressure on prices for suppliers. Those who are able to absorb these pressures with the appropriate products and partnerships in sales and production as well as with market-driven service portfolios will not only be able to survive but also thrive in the markets of the future.

Editor's note: In the first part of this Q&A (published Nov. 14), Schäfer discussed the show’s incredible growth and the strategies involved in developing the Connected Healthcare Forum.