ZedScan is back at Medica.

The diagnostic system that is attempting to change the clinical pathway for cervical cancer will once again be on display this year at Medica by Zilico Ltd.

ZedScan is a portable, handheld device that uses patented electrical impedance spectroscopy (EIS) to detect the development of pre-cancerous abnormalities of the cervix, known as cervical intraepithelial neoplasia (CIN). The system not only removes subjectivity and increases accuracy, but it also helps clinicians manage growing colposcopy referrals generated by the introduction of primary HPV testing, according to Zilico. 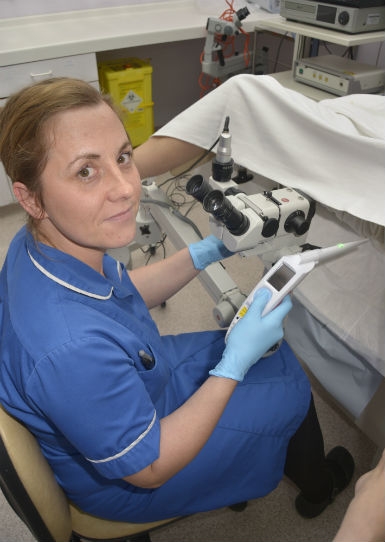 ZedScan uses patented electrical impedance spectroscopy (EIS) to detect the development of pre-cancerous abnormalities of the cervix.
In a recent review of more than 1,500 women referred to an National Health System colposcopy clinic, the adoption of ZedScan resulted in a significant increase in disease detection and improvements in clinical performance.

The patient case study revealed a 13 percent increase in detection of high-grade disease (HGCIN) across all patients, with a 50 percent increase reported in women with low-grade cytology. In 92 percent of these cases, disease was confirmed with a single biopsy. The product's performance was not impacted by the hrHPV genotype with increased detection in both HPV16 and non 16 hrHPV positive women.

If rolled out across the United Kingdom, this would equate to an additional 200 women being identified with HGCIN every week, or approximately 10,000 women each year who could be diagnosed and treated much earlier.

Cervical cancer is the seventh most common disease globally, and the third most prevalent in women. The disease is caused by the persistent high-risk human papillomavirus (HPV) infection, which triggers changes in the cervical cells.

Although colposcopy is an important method in detecting cervical cancer, in practice, the procedure has not drastically changed over the last 90 years, and diagnosis depends on the subjective assessment of visual indicators by the clinician. An objective assessment will help clinicians to better manage patients and help avoid unnecessary biopsies, treatments and repeat follow-up appointments.

“ZedScan is now used in many hospitals across the globe as an adjunct to the current diagnostic process to offer a more accurate diagnosis in real time and assist clinicians with improved patient management," Zilico CEO Sameer Kothari said. “Colposcopy referrals are expected to increase dramatically following the introduction of HPV screening and ZedScan can provide a cost effective means to accommodate this growth. It can also increase compliance with hospital guidelines for performance and waiting times.”

Zilico was founded in 2006 following a collaboration between the University of Sheffield and Sheffield Teaching Hospitals NHS Foundation Trust to develop a more accurate means of diagnosis for cervical intraepithelial neoplasia (CIN). The company has developed its patented electrical impedance spectroscopy into a platform technology for cancer diagnosis and is expanding its product development into other clinical areas. Zilico's head office is located in Manchester, United Kingdom, with a subsidiary office in Sheffield. Manufacturing and R&D functions are also carried out in the United Kingdom. Zilico achieved ISO 13485 accreditation in 2013.