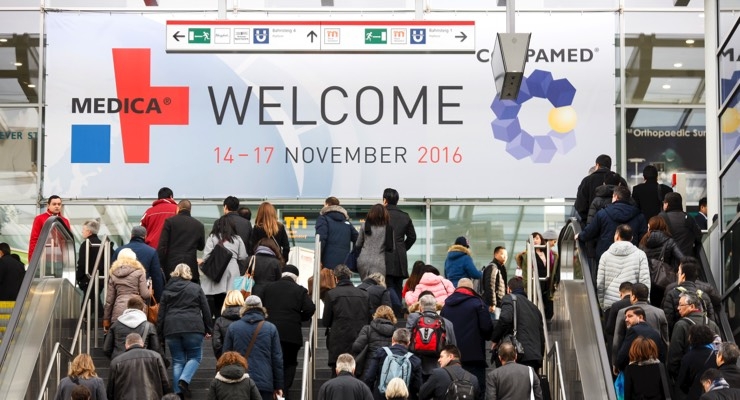 Having nurtured its reputation as an up-and-coming industrial and trading city during the first three decades of the 20th century, local leaders founded Messe Düsseldorf under the name Nordwestdeutsche Ausstellungsgesellschaft mbH (NOWEA) on Jan. 7, 1947. The fairground was originally located in the halls of the city’s main courtyard but moved to its current spot along the Rhine River due to steady growth in participants. The new site became operational with the “K” International Plastic and Rubber Fair of 1971.

Medica was conceived two years before that, hosting 135 healthcare exhibitors and 4,700 visitors. Growth has essentially exploded since then, attracting more than 130,000 attendees in 2015 and topping 5,000 exhibitors this year for the first time in the show’s 48-year history. Overall attendance has climbed 3.2 percent since 2000, with representation from more than five dozen countries (China, Italy, France, Great Britain, and the United States are top supporters as well). The event’s geographical composition has remained fairly steady, with Germany comprising a significant portion of total exhibitors and exhibit space (Deutschland exhibit space totaled 37,537 square meters this year, 32 percent of Medica’s 116,068 square-meter total). (Editor’s note: See Medica By The Numbers for an overview of the fair’s growth since its inception).

“Medical technology continues to be a fascinating growth market,” said Joachim Schäfer, managing director of Messe Düsseldorf. “There was a very strong phase, particularly at the beginning of the millennium, with enterprises achieving two-digit increases with regard to the sector-wide average over a period of several years in a row. This phase seems to have ended. However, the medical technology business continues to be described as promising throughout the course of numerous market reports.”

Those market reports have helped shape Medica programming over the course of its history. This year’s meeting—in keeping with tradition—features a mix of old and new topics, with the Medica Education, Medicine + Sports, Disaster and Military Medicine (DiMiMED), and Physio conferences as well as the Medica Connected Healthcare and Medica Health IT forums returning for encores.

Watch the video below for an overview of Medica 2016:

Returning Favorites
First held in 2014, the Education conference is once again organized under a “Science Meets Medical Technology” theme, featuring four daily topics covering specific healthcare issues. The first day’s focus was “new operative techniques” in surgery; the second day will cover imaging and interventional procedures such as magnetic resonance tomography and sonography; the third day will hone in on internal medicine; while the final day will examine diagnostics in laboratory medicine, toxicology, internal medicine, and hygiene.

The Medicine + Sports Conference, taking place on Nov. 15 and Nov. 16, will focus on body enhancement and innovations with immediate implementation possibilities. The conference also will feature a “cyblathon”—i.e., a competition for people with disabilities using robot-assisted technologies. “Pilots” from 23 countries will compete in six disciplines, including a virtual thought-control race, a bicycle race with muscle stimulation, various obstacle courses for those with arm and leg prosthetics, and races with electronically-powered wheelchairs and exoskeletons.

Those attending the Connected Healthcare Forum in Hall 15 will get a glimpse at the networked future of healthcare. There, attendees will learn the latest digital strategies to combat diabetes, measure heart rate (smart watches and fitness straps), and evaluate blood oxygen levels. Firstbeat, for example, uses science-based algorithms to analyze fluctuating heart rate variability (varying time between two heartbeats), while the wearable Automated Device for Asthma Monitoring and Management (ADAMM) by Health Care Originals detects imminent asthma attacks, usually several hours before its user. “The digitalization of healthcare is progressing at an unstoppable rate, and this concerns all fields, outpatient and clinical care, as well as patients and physicians alike,” said Schäfer.

Big data will undoubtedly be addressed at the Health IT forum (Hall 15). Ulrike Röhr, vice president of the LandFrauenVerband Schleswig-Holstein (Country Women’s Association of Schleswig-Holstein) will be presenting a health campaign at the forum designed to increase awareness of telemedicine among women living in rural communities.

“The topic of big data is not any less exciting, whereby it would probably better be called smart data. The best future prospects can be expected due to big players in the digital economy such as Google, Apple, Microsoft, or IBM also becoming active in the healthcare sector in addition to many startups,” Schäfer noted. “These players are currently investing enormous sums in the development of artificial intelligence. The results entail innovative software, which in part, offers sensational options. This applies, for example, to the research and development of algorithms for automated image analysis. In the field of stroke, there is already a very promising solution with the goal of making the professional expertise of neurologists generally available via the software-based assessment of CT images. In this way, faster decisions with regard to suspected cases of stroke can be make in the accident and emergency departments without a neurologist necessarily being present.”

Other returning favorites include the German Hospital Conference, the Physio Forum, and the App Competition.

New This Year
In addition to the revamped schedule implemented in 2015 (a Monday-Thursday timetable), this year’s Medica features the first T5 Career Forum. The new addition—covering the topics of recruiting and career planning—is being implemented in close cooperation with the T5 KarrierePortal as a platform for employers as well as medical experts and managers. Both Medica and T5 KarrierePortal are reciprocating efforts in this area, linking an electronic job market boards with the portals at medica.de and T5-karriereportal.de (www.medica-tradefair.com/tcf2).

About 15.1 percent of Medica’s exhibitors are showcasing their wares at Compamed, a smaller conference for medtech manufacturing service providers. Debuting in 1992 with 52 exhibitors, Compamed hit a record high this year of 774 participants from 37 nations and more than 13,000 square meters of demonstration space. Held in Halls 81 and 8b, the four-day show is being held concurrently with Medica (Nov. 14017), covering all aspects of the medtech supply chain, with a particular focus on digitalization and connectivity.

“The [medical technology] sector is dominated by small and medium-sized business. And they are finding it difficult to identify the potential that networked factories have to offer,” explained Dr. Jens Nitsche, director of research and development for the consulting firm Ingenics. “A trend that we are currently seeing is ‘digitalization.’ Mobile health applications, the ‘Internet of Things,’ wearables, and smart implants and textiles are playing an increasingly significant role in the product market…”