Patients are entitled to digitization. 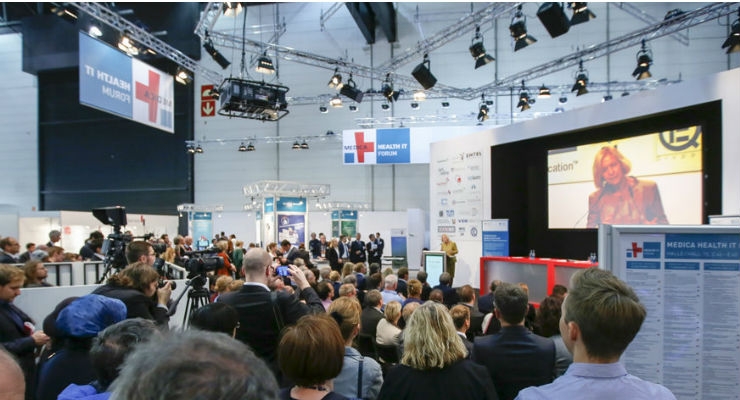 How are people responding to this innovation? In her presentation at the Medica forum entitled “x-Health,” Prof. Dr. Britta Böckmann from Information Sciences and Medical Information Sciences at Dortmund's University of Applied Sciences, will look into how current developments in the health sector could be focused on people and their needs. The forum in Hall 15 is an established part of Medica, the world's leading medical trade fair taking place in Düsseldorf, Germany from November 14 – 17, 2016. The Medica Health IT Forum will mainly address topics ranging from medical digitization, big data, and personalized medicine, to start-ups in the eHealth sector.

“E-Health, mHealth, telehealth—many deficiencies exist in Germany where data exchange and interoperability are concerned,” says Dr. Böckmann. “x-Health,” on the other hand, stands for the necessary interoperable “XChange” of location-independent digital services. This is a rapidly growing international market: All patients in Denmark, for example, have their own electronic health files. The sundhed.dk portal where these files are kept was already set up in 2003. More and more people have started to use this method of accessing their information since personal Internet IDs, which may also be used for financial transactions in Denmark, were introduced. The project initially focused on making existing data available for people to use. But now, first applications have been developed that enable people in Denmark to add to their own data. The transformation in Germany, however, has, in contrast, been very slow and almost unnoticeable. It is obvious that patients will gain benefits from having all their important information stored in a single place. Here, however, patients must remain in charge of their own data and it must only be the patients who possess the authority to release it individually for use by doctors.

Shortage of Doctors to ‘Turbo-Charge’ Data Exchange?
The shortage of doctors and the challenge of providing good medical care in rural communities could produce a boost in developments. Ulrike Röhr, vice president of the LandFrauenVerband Schleswig-Holstein (Country Women's Association of Schleswig-Holstein), will use the Medica Health IT Forum to present the 2016/2017 health campaign that has been launched to make all women living in rural communities aware of the opportunities that telemedicine presents. The LandFrauenVerband has more than 33,000 members who, starting in autumn 2016, will meet with representatives from the State Chamber of Physicians at their approximately 180 local associations to discuss the possible effects should coverage by the network of general practitioners start to deteriorate. The promise: Various healthcare services—ranging from measuring blood-sugar levels to weighing—could be provided with the aid of telemedicine without the need for patients to go to a doctor’s practice. But questions still remain: Will the new technologies completely eliminate personal contact with physicians? What technical requirements would have to be met and how secure would such a data transfer be? Ulrike Röhr is in any case certain, “We are not going to be left behind! We want the same opportunities and the same care in rural areas.”

The LandFrauenVerband is not the only group that is particularly interested in telemedicine. And it is not only in rural areas where people in Germany want to know more about the topic. This has been demonstrated by the representative survey of the Bitkom Federal Association for Information Technology of around 1,000 consumers from the age of 14. The poll showed that one in five would use telemedicine to monitor their own health in case of illness, while another 39 percent could at least imagine making use of this opportunity.

Innovation Fund Supports Projects
Some service developers are relying on the Innovation Fund to deal with needs such as those outlined previously. The fund was set up by the German Federal Ministry of Health through its Federal Joint Committee. It has been awarded Euro 300 million annually from 2016 to 2019. It was created for the purposes of promoting innovations in care and care research. There are many applicants for grants from the fund. Dr. Thomas Aßmann is one of them and he will present his project at the Medica Health IT Forum.

He wants to use his project to test the possible delegation of tasks to “Tele-VERAH”—a system where a medical professional in remote contact with the doctor attends patients. Dr. Aßmann thinks that the elimination of travelling times, for example, would be an important argument for introducing such a system. It can take more than 20 minutes, for instance, for rural GPs to reach their patients: “I actually do not get paid for my driving skills.” But a so-called “Tele-VERAH” medical professional could instead attend patients on behalf of the doctor. That person would have everything with him or her that a specialist in internal medicine would require—from ECG and lung-function testing equipment to blood-sugar-level testing devices and scales. All the data would then be transferred back to the practice. And then, if there are any remaining questions, the physician could be consulted live via video link. “This is particularly important to general practitioners because the sound-and-vision consultation would allow them to see how the patient was responding,” explains Dr. Aßmann.

Patients would not be left alone with the new technologies because the “Tele-VERAH” medical professional would be at hand to help. Such a system would also reduce the number of precautionary emergency-services resulting from anxious patients and/or relatives. “The system could also help stop unnecessary admissions to hospitals,” adds Dr. Aßmann. This would, as a consequence, make the concept also economically interesting to health insurance companies. Dr. Aßman explains three of the concept's benefits:

The concept is the result of a training-and-qualifications program launched by the Hausärzteverband (German Association of General Practitioners) for specially trained GP assistants. The hope is that they will be able to reduce GPs' workloads by providing qualified support. Dr. Aßmann thinks that this concept should be expanded to include the “Tele-VERAH” concept. A curriculum for the profession of specialist medical assistants that addresses legal, technical, and medical questions is being developed to this end. The occupational profile for medical professionals and VERAHs is changing.

Important Direct First Contact with Doctors to Remain
Based on his experience, Dr. Aßmann thinks that physicians and patients alike will welcome the concept. The much discussed ban on remote treatment that is set out in physicians' codes of conduct would not have a negative impact on the provision of such services. Doctors are only banned from providing remote treatment to patients they have not seen before. Dr. Aßmann only wants this service to be provided to existing patients. It would also be possible in the future to expand the service to include nursing homes and hospitals. Will these expectations be fulfilled? Prof. Jürgen Wasem, medical management at the University of Duisburg-Essen, has been asked to prepare a report. Some health insurance companies (e.g., Techniker Krankenkasse) have shown great interest in the concept.

The “eHealth Venture Summit” at which the latest IT trends and innovations in healthcare and the corresponding investments are presented will also be taking place at the Medica Health IT Forum. It is expected that it will promote strategic partnerships that will help bring products to market.

Run on Apps Raises Questions
Many of these issues, however, remain questionable. No one will want to claim that every one of the estimated more than 100,000 health apps is actually helpful, useful, and/or effective. The “Chances and Risks of Mobile Health Apps (CHARISMHA)” survey recently dealt with the range of available products. Dr. Urs-Vito Albrecht headed the study. He is deputy director of the Hanover Branch of the Peter L. Reichertz Institut für Medizinische Informatik (PLRI—Peter L. Reichertz Institute for Medical Informatics) and managing physician of the Ethics Commission at the Hannover Medical School and carried out the survey on behalf of the Federal Ministry of Health. The results are currently discussed with health officials for the purposes of deriving concrete measures and voluntary commitments. Visitors to the Medica Health IT Forum will be able to join in the discussion live. His co-speaker, Dr. Franz Bartmann, is chairman of the Telematics Committee at the German Medical Association.

He is of the opinion that it needs to be clarified whether and to what extent the medical community can help shape the orientation process, for instance, through the development of a general guideline for app assessment or the creation of an indication and best-practice list by the respective specialist associations. Freely available health apps are widely used today in the second healthcare market. But they play hardly any role in the primary health market funded by health insurance companies: “The big obstacle here is the current unique time- and cost-intensive certification process required by the Medical Devices Act. A catalogue of criteria could in future at least contribute to an idea of usefulness and benefits, also in regard to the added value over already available conventional methods. It must, for example, be possible to use apps in medical emergencies without requiring any intervention by the users themselves. Only demonstrable benefits and reliable functionality will justify medical application at the expense of public health insurance companies.”

Prof. Dr. Britta Böckmann draws a rather sobering conclusion about the current state of xHealth. “Legally and theoretically, patients are in sole control of their details, but in reality, they are unable to view them or pass them on.” Having the correct medical information at the right place and at the right time could, however, save lives: “Patients are entitled to digitization.”

All information about the Medica Health IT Forum's program and topics are available online.

The program details for the forum presentations mentioned above: