Three recent events have cast fresh light on the importance of Mexico to the U.S. medtech market. 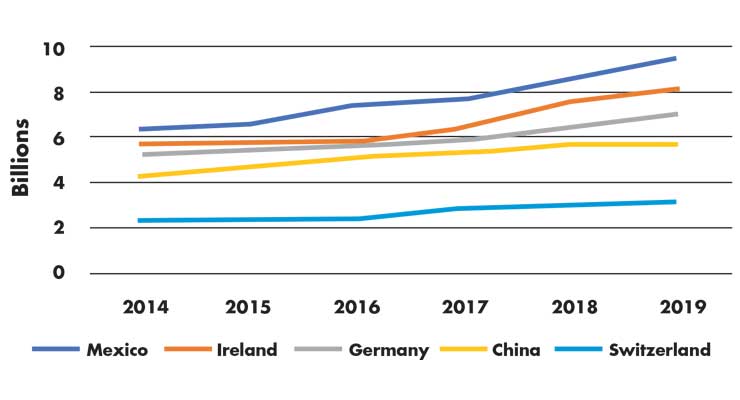 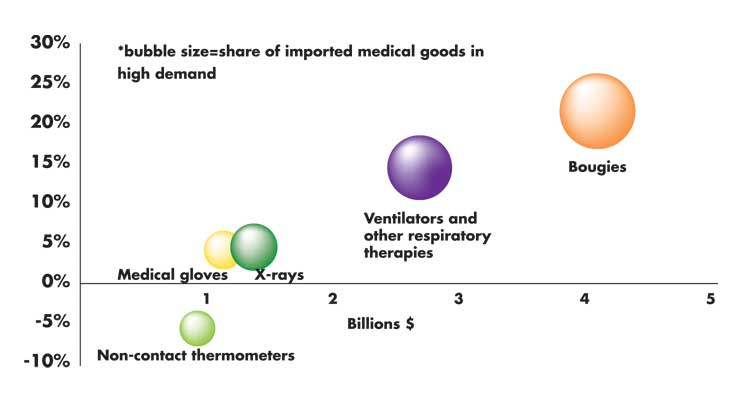 Three recent events have cast fresh light on the importance of Mexico to the U.S. medtech market: 1) As trade has declined in China following the imposition of tariffs under Section 301 of the trade act, U.S. imports of these products from Mexico have increased nearly 10 percent; 2) Mexico’s official implementation of the U.S.-Mexico-Canada Agreement (USMCA) on April 4; and 3) growing U.S. demand for products associated with combatting a pandemic, many of which are made in Mexico. This article explores each of these three developments.

How Chinese Tariffs Boosted Mexican Imports
Since July 2018, the United States has imposed tariffs on a range of Chinese-manufactured goods. As I noted in an MPO column last spring, these measures were imposed under Section 301 of the U.S. Trade Act of 1974. By August 2018, medical devices and related parts were implicated in roughly 6 percent ($2.7 billion) of the total value of tariffs that had been assessed.

China’s centrality to the global medtech supply chain is difficult to overstate. The country has served as the principal destination for U.S. medtech multinational investment for much of the past 15 years. During this time, such investments to China have nearly matched those of all other countries combined.

The vast majority of foreign direct investment (FDI) by U.S. medtech firms has targeted the establishment of manufacturing facilities, which drives a substantial portion of U.S.-China medtech trade; roughly one-third of U.S. medtech imports have been sourced through affiliates in China in recent years.

However, by raising business costs, the imposition of tariffs on Chinese imports have dented a principal motivation to invest in the country. Further, these tariffs were applied against the backdrop of rising wages in China, which has further raised the cost of doing business there.

In looking at the trade data, Mexico appears to have benefited from these developments. U.S. imports from Mexico—which have increased faster than any of the other top five leading suppliers over the past five years (Figure 1)—have also become a principal supplier of goods on which Section 301 tariffs were assessed; U.S. imports of the products targeted by the tariffs have fallen by 16 percent from China, but have risen by 8 percent from Mexico between September 2018 and December 2019.

USMCA Implementation Preserves Gains Achieved Under NAFTA
The North American Free Trade Agreement (NAFTA) heralded a dramatic shift in U.S. medtech supply chains. Since NAFTA’s inception, total trade in medical products between the United States and its NAFTA partners (Canada and Mexico) has expanded by nearly 800 percent, eclipsing $16 billion in 2019. A principal benefit of the Agreement was the zeroing out of tariffs for nearly all medical products, as well as associated inputs.

This enabled U.S. medtech firms to concentrate in segments of the supply chain where they exceled (e.g. research and development, high-end manufacturing, marketing), while relocating low-cost elements of production to Mexico, where labor costs were much lower. Currently, there are more than 70 medical device manufacturing facilities in Mexico that are owned by U.S.-led firms, such as CareFusion, DJO Global Inc., Hill-Rom/Welch-Allyn, Integer, and Medtronic plc. More than 90 percent of U.S. medtech imports from Mexico is conducted between U.S. headquartered firms and their Mexican affiliates.

After more than one year of renegotiation, the three parties successfully renegotiated NAFTA, rebranding it as the U.S.-Mexico-Canada Agreement (USMCA). On April 4, Mexico notified the United States and Canada of its intention to begin implementing the Agreement.

Beyond simply preserving the gains achieved under NAFTA, USMCA includes a handful of chapters that could further benefit regional medtech trade by ensuring regulatory harmonization and cooperation (Chapter 11: Technical Barriers to Trade, Chapter 28: Good Regulatory Practices, and Chapter 29: Publication and Administration); reforming customs procedures (Chapter 7: Customs and Trade Facilitation); and modernizing the Agreement to reflect the rise of digital trade and the need to ensure cybersecurity (Chapter 19: Digital Trade). In addition, the Agreement’s inclusion of an Annex specific to medical devices commits all three countries to recognizing quality systems audits performed under the Medical Device Single Audit Program (MDSAP) for laboratory inspections; Mexico had not previously used MDSAP, which allows firms to undergo one audit by an accredited third party to satisfy quality regulations of other countries.

It should be noted that despite the successful negotiation (and forthcoming trilateral implementation), the United States has still threatened to impose tariffs on Mexico, including on medical goods, relatively recently. Last June, for example, the United States raised this very possibility, but tariffs never materialized and, for now, the United States and Mexico remain poised to operate in a liberal trading environment.

Mexico Currently Boosting Production of Key Medical Goods
As the United States contends with an unprecedented public health crisis, the country is heavily drawing on Mexico to supply an assortment of products. Chief among these goods include ventilators (and associated parts), respirators, thermometers, and hospital beds.

Due to the relatively labor-intensive nature of goods within the personal protective equipment industry in particular, much of the production of these goods has been offshored to countries with low labor costs—especially Mexico and China over the past two decades. For example, an estimated 80 percent of face mask manufacturing is performed in China. Likewise, in the case of ventilators, foreign production accounts for the majority of global supply; only two of the top five global producers have assembly plants in the United States (Vyaire and Philips). As such, imports from countries like Mexico have been heavily relied on to meet domestic demand in the United States.

Companies likely to feature prominently in this story are Texas-based Integer, which produces batteries for ventilators in its Mexican facility in Tijuana, and Indiana-headquartered Hillrom, which announced plans to manufacture noninvasive ventilators in its Tijuana factory. The latter will also be called upon to produce thermometer parts and stretchers for hospitals. Likewise, New Jersey-based Becton Dickinson and Company—which employs 15,000 people in Mexico—can be expected to contribute catheters and IV sets.

At the same time, the need to quickly produce ventilators, respirators, masks, and face shields has spawned a number of partnerships across different industries. Notable pairings include automakers (General Motors, Ford, and Chrysler Fiat) with traditional medtech firms (Ventec Lifesystems and GE Healthcare) and leading PPE manufacturers (3M). At the same time, the United States’ invocation of the Defense Production Act has called on companies to prioritize government contracts over private ones and has raised the prospect of additional resources being devoted to the production and distribution of vital medical goods. These efforts will likely draw heavily on the inputs supplied by Mexican facilities.

Mexico’s contributions to supplying the United States are especially valued, given the raft of export restrictions currently sweeping the world. As of April 12, nearly 70 countries—including key suppliers to the United States—have placed restrictions on exports of medical equipment, which range from limits, de facto bans, and bans. These measures have been aimed at preserving supplies for the respective domestic markets.

The implementation of these policies from key suppliers, such as the EU—from which the U.S. sources the vast majority of its X-ray equipment (86 percent), breathing masks (72 percent), and patient monitors (61 percent); Taiwan—an important supplier of protective goggles (17 percent); South Korea provides a significant amount of ultrasound systems (26 percent); and China, the United States’ leading supplier of protective equipment (72 percent), protective goggles (55 percent), and disposable medical headwear (52 percent) may impose substantial stress on global supply chains. Notably, Mexico had not imposed such limitations as of mid-April.