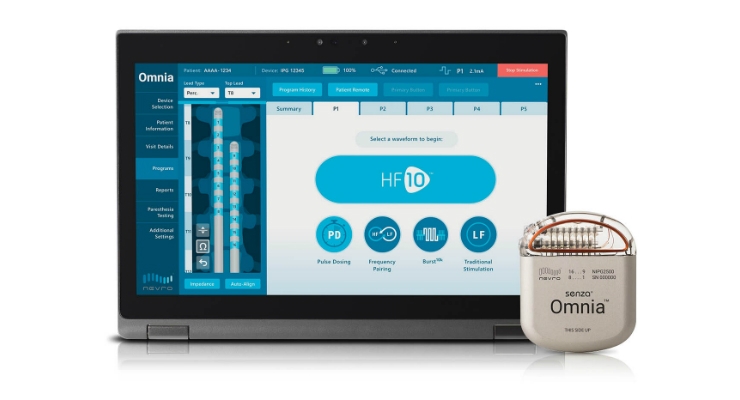 The Omnia system is designed to deliver Nevro's proprietary HF10 therapy in addition to all other available SCS frequencies. Image courtesy of Nevro Corp.
Nevro Corp.11.05.19

Nevro Corp., a global medical device company, has received approval from the FDA for the Senza Omnia Spinal Cord Stimulation (SCS) System. The Omnia system is designed to deliver Nevro's proprietary HF10 therapy in addition to all other available SCS frequencies.

The Omnia system is comprised of three new components. The first is a new programmer that will make it easy for physicians to offer a wider array of waveforms across the full SCS frequency spectrum, either separately or paired together. The second element of the system is a redesigned patient remote for patients to use. The new remote supports greater programming capacity, allowing for the flexibility to expand on the HF10 algorithm by giving physicians the ability to provide additional waveforms. Lastly, the system comes with an updated and upgradeable implantable pulse generator. The Omnia system is designed to last over ten years no matter what stimulation profile is used, has conditional full body MRI approval and will be upgradeable to future waveforms and frequencies.

“We are excited to launch Nevro’s next-generation spinal cord stimulation system as we believe it will allow physicians to help even more patients,” said Keith Grossman, chairman and CEO of Nevro. “The Omnia system was developed based on feedback from the pain community and has resulted in a product that Nevro is uniquely able to provide. Omnia not only offers HF10, the most studied therapy available in the market that physicians have provided to over 53,000 patients, but it also gives physicians access to all other SCS frequencies, either independently or paired with HF10. With Omnia, our goal is to provide physicians the peace of mind that when they implant the system, they will have the versatility needed to achieve the best possible outcomes for their patients.”

According to the company, Omnia delivers the widest range of frequencies of any SCS system, between 2 and 10,000 hertz. In addition to HF10, Omnia offers the most waveforms in a single product and can be programmed to provide waveforms independently or paired with HF10. The pairing of waveforms across frequency ranges enables dual mechanisms of action that no other system can offer.

“The FDA approval of Omnia to treat chronic pain reflects what I’ve seen firsthand in my practice: many people suffering from chronic pain need a versatile solution to treat the dynamic, and sometimes progressive, nature of pain,” said Kasra Amirdelfan, M.D., director of medical research at IPM Medical Group in Walnut Creek, California. “With Omnia, we can now offer patients the proven advantages of HF10 therapy while still having access to all other SCS frequencies. The patient response in my practice during the recent limited evaluation period has been positive and I look forward to providing the Omnia system more broadly in my practice.”

In addition to the U.S. approval for Omnia, international approvals are expected in Europe during the first half of 2020 with Australia sometime during the latter part of 2020.
Related Searches
Related Knowledge Center