How the team working on an “Open-Source” COVID Ambu-bot Ventilator optimized its short timeline.

Getting FDA approval for medical machines can easily take more than six months, but that is not always the case. A talented product development team comprised of members from Teknic, Boston Scientific, the University of Minnesota (and others) were able to get a ventilator for COVID-19 patients designed, built, tested, and approved for FDA Emergency Use Authorization in less than 30 days.

During the early outbreak of COVID-19 pandemic, it was feared that ventilator device shortages were likely to occur and that this would result in countless deaths. The first approach and solution seemed obvious – simply (and quickly) manufacture more ventilators. Unfortunately, scaling up production to meet the expected demand could take many months or even years. As doctors were running out of ventilators, medical professionals, government agencies, and researchers were working diligently to find a more timely alternative.

It quickly became apparent that if the supply of ventilators ran out, some patients would have to be manually ventilated with an Ambu bag or they could possibly die. Although Ambu bags are readily available, the number of trained clinicians is insufficient to meet the patient load requirement. Operating an Ambu bag requires a clinician to actuate the bag about 10-30 times per minute without stopping, which is a time consuming and physically demanding task. Additionally, when one clinician gets fatigued and cannot continue, a replacement clinician must cycle in. This delicate and essential process must continue until the patient recovers enough to breathe on their own or a ventilator becomes available. 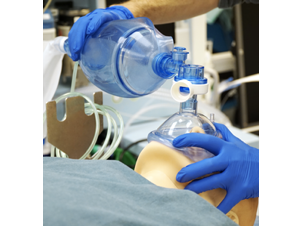 Assembling the Team
In March of 2020, a group of remarkable people came together: Dr. Stephen Richardson (an anesthesiologist at the University of Minnesota), Jim McGurran (an engineer from MGC Diagnostics), and a group from the Earl E. Bakken Medical Devices Center. This team worked together to conceive and create an early prototype of a single-axis linear actuator to automate human respiration using an Ambu bag.

On a recommendation from Digi-Key (a large electronics distributor), the team contacted Teknic for advice on the project’s motion control requirements. Teknic is an OEM manufacturer of high performance, servo-based, motion control components. Digi-Key had previous experience with Teknic on some motion control related projects and was so impressed that they were willing to recommend Teknic for this time-sensitive and critical project. SPOILER ALERT: In just over two weeks, the collective team brought the device design all the way from initial concept, to prototype, and then to production.

Meet the “Ambu-bot”
The machine was internally nicknamed “Ambu-bot” by Teknic. This design was not intended to replace a true ventilator, but was intended to automate the manual ventilation typically performed by medical personnel so that clinicians in over-stressed hospitals can attend to other critical patients. 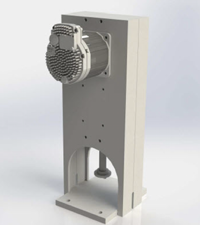 A complicated ventilator design requiring sophisticated adjustments (typically found in conventional ventilators) was replaced with a technically functional and simpler design using an Ambu bag. Creating the Ambu-bot design drastically sped up the design phase, prototyping, testing, and production time frame. The time sensitive urgency of the pandemic drove these design goals and was perhaps the strongest driving factor among the project objectives.

Recall that the normal process of using an Ambu Bag requires that one to two hospital employees must be assigned for each patient in need of assisted ventilation. The Ambu-bot allows a single clinician to monitor multiple patients concurrently. The clinician can now ensure that the needs of multiple patients can be met simultaneously and can ensure that vital signs (e.g., blood gases, heart rate, etc.) stay within an acceptable range.

So exactly how did this important team get a medical machine designed, built, and FDA Emergency Use Authorization approved in less than 30 days? (The timeline is nothing short of amazing!) Read on to find out.

Day 1: Initial Prototype Design
The team set a target to have a functioning prototype design within two days. They created a list of goals for the actuator including: adjustable speed control, compression control, ease of manufacturing, and an open-source design. It also needed to be ready for mass production (~10,000 per week) in approximately one month and be easy to use by medical personnel requiring minimal training.

The Teknic team iterated on the existing design multiple times and included tasks such as solid model updates and the creation of a number of conceptual examples. This video shows an early prototype of the actuator used to manipulate the bag using some easy-to-manufacture components (i.e. easily machined or 3D printed parts) and a ClearPath integrated servo motor:

Day 2: First Prototype Trial
Engineers worked tirelessly to produce several different prototypes within 24 hours. The prototype featured in the video below was not visually attractive (4×4 lumber was used along with plywood and some PVC pipe), but the prototype design proved that the project was on the right path:

It would have been nice to be able to incorporate a more sophisticated design into the ventilator, but the added complexity would have caused delays to the production schedule due to the extra time required to design, test, document, etc the additional features. Additionally, these features would have made it more difficult for manufacturers to source the required components and assemble the machine.

Day 4: Functional Test at the University of Minnesota
As Teknic rapidly iterated on designs, the doctors at the University began laboratory testing the early prototypes. This video provides product details and a brief overview of the testing process:

Teknic was working on a design that would use readily available windshield wiper motors in high volume (tens of thousands per week), but ultimately decided to use Teknic’s ClearPath motors on the initial prototype units for a number of reasons. The ClearPath motors were readily available with multiple configurations that were appropriate for the ventilator design, and they were confident that they would have the prototype actuators running quickly on the first try. It is important to note that if a redesign was required, even a few days into the project, it would have delayed the critical task of collecting laboratory data. This delay would mean that the lives of critical COVID-19 patients would be at risk.

Day 8: Project Iterations and Pre-Production
Teknic continued to iterate on the design and selected a version that eliminated any gearing. While this change required an increase in motor torque, it addressed the “open source” goal more effectively. It also meant that manufacturers wouldn’t have to be concerned with sourcing gearboxes in an environment of reduced manufacturing and limited part availability:

The team started building pre-production quantities and Teknic also began working on a preliminary design for a new motor drive that could drive a less sophisticated motor. The goal was to be able to use a more simplistic motor that could be sourced from a wide variety of motor manufacturers.

Day 11: FDA Emergency Use Authorization Application and Production
The Governor of North Dakota, Doug Burgum, placed an order for 2,000 Ambu-bot ventilators in anticipation of the FDA Emergency Use Authorization approval. Appareo Systems, an electronics manufacturer in North Dakota, joined the development team and began ordering components (including Teknic motors), manufacturing parts, and assembling the devices for rapid deployment. 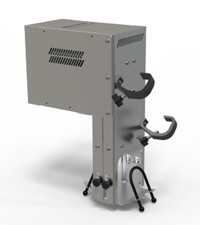 Day 20: Positive Initial Review from the FDA
The University of Minnesota and Boston Scientific met with the FDA. Boston Scientific said that “[The FDA group] greatly appreciates the fast response we are delivering with the appropriate use of technical standards, quality and design controls, risk management processes, and manufacturing practices to ensure device safety and performance.”