Do new biomaterials require new paradigms, or does their introduction to the market create paradigms? It is almost hard to believe that some of the most prominent resorbable biomaterials today have been in use in medical devices since the 1960’s. Although the sum total of human knowledge on material properties and their interactions with human tissues has increased greatly since those days, the final devices used in patients have taken little if any advantage of this new data.

Most resorbable devices on the market are made from some combination of poly lactic acid (PLA), poly glycolic acid (PGA), poly caprolactone (PCL), or poly dioxanone (PDO). While each “Big Four” biomaterial has its own story, here are three common reasons for the adoption of the major resorbables we use today and the lack of adoption of the rest:

1. The majority of the Big Four were first characterized between 1960 and 1990, when FDA regulatory hurdles were lower, and since the materials are tried and true, manufacturers tend to gravitate toward them in order to simplify their projects.
2. Much of the device innovation that takes place at the corporate level is unfortunately stifled by a fear of failure. Paradigms about how the FDA and European Regulatory view new biomaterials often kill projects before they even get a shot at a review by regulatory authorities.
3. Academic institutions that develop new materials often lack an understanding on how to bring their new technologies to market, and they are ill-equipped to deal with the new regulatory landscape.

Having good examples of biomaterials that break these barriers would go a long way to igniting a wave of novel innovations. It turns out that such an example is on its way: poly(glycerol sebacate), or PGS. From its inception, this material has been gifted with broken paradigms. It was invented by the highly acclaimed scientist and MDEA Lifetime Achievement Award winner Dr. Robert Langer, and his post-doctoral assistant, Dr. Yadong Wang, both of whom understand the challenges associated with commercializing biomaterials. From there it was taken up and licensed by a company, Secant Medical, which understands all the risks associated with selling the material and creating the market for it, but is not paralyzed by the daunting task.

Even the applications for PGS push the envelope in comparison to the Big Four. Current biomaterials tend toward a relatively crystalline structure with some potential for adjustment by combining with amorphous agents. This has served patients well over the decades because it has enabled the creation of sturdy resorbable parts and moldable shapes that can act as components in various devices. However, what has generally not been good about the Big Four is their compliance mismatch with soft tissues—these materials do not share the elastic properties and feel of cardiac muscle, for example. By contrast, PGS is an elastomer that is a rarity among biomaterials cleared for use in today’s devices. It has been shown to work as an effective heart patch material over cardiac muscle and as a substitute material for resorbable vascular scaffolds. The paradigm of forcing a crystalline material with poor fatigue properties to work in a pulsatile tissue environment is thereby shattered.

For orthopedic applications, this material may also promise some change. General biocompatibility for bone cells with PGS has been established in the literature, and a recent paper published in Tissue Engineering Part A used the material in a scaffold to fill a rabbit ulnar defect. What was interesting about this study’s results (and not entirely pointed out by the authors) was that some of the histology showed a cartilage intermediary in the bone healing process. For hard crystalline bone replacements, this does not occur. In fact, one of the challenges in bone replacements is having bone grow through the entire scaffold before it decides to stop, which happens for reasons we do not entirely understand. However, when bone heals with a cartilage intermediary, it usually pervades an area entirely with cartilage first, which then converts to bone; the problem of bone infiltration over a distance does not happen. Since PGS is a flexible material, it acts more like the natural tissue present in a bone callus during a fracture, which is initially soft tissue. Having a soft material in a bone defect undermines the traditional paradigm of matching hard bone with a hard material, and this may prove to be a clue to a new type of bone scaffold.

There is no question that the technology available today is capable of producing much more advanced medical devices and tissue interfaces than those of the past. What remains is the more widespread adoption of innovative biomaterials by dedicated developers and their collaborators. With confidence in their abilities, new firms need to take the plunge and put in the time and research necessary to gain an edge. This will ultimately pay dividends for patients and profits alike.

Josh Simon, Ph.D. is business development manager at Secant Medical, Inc. (Perkasie, PA). Focusing on orthopedic and neurovascular applications, Simon works with the company’s partners to bring their biomaterial visions to life in products. He is also an adjunct professor at the New Jersey Institute of Technology (NJIT), where he teaches courses on medical device development, project management, and orthopedics. 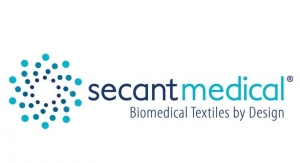